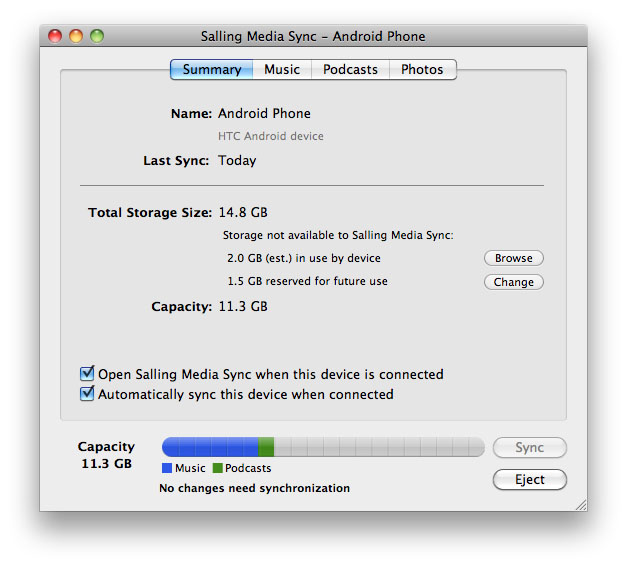 I own a HTC Desire for quite a while now (actually since it came out) and I’m still very happy with it – and YES, I used an iPhone before and I’d never trade it for my Desire. However, one thing that really annoyed me was that synchronization was not as smooth as on the iPhone, where you could just connect the device, fire up iTunes and that’s it. The reason for this is that HTC does not offer its software called “HTC Sync” for Mac computers (boooo, HTC!). Thus, I needed a decent synching solution for my Android phone that also works on a Mac.

So, I started googling around and the first thing that I found was DoubleTwist, which calls itself “iTunes for Android”. After giving it a chance for some days, I realized that this piece of software seems to be pretty buggy. Whenever I synced between my HTC Desire and the iTunes library, something went wrong, for example missing songs or even duplicates. To sum it up: It was unusable. On top of that, the integrated Amazon store, where you could buy and downloads songs from, is not available here in Germany. Epic fail, I’d say. At least it’s for free.

After being disappointed by DoubleTwist, I had to manually sync my computer and smartphone by copying files between them. No need to say that this was definitely an unsatisfying solution. So, today I stumbled over a really nice tool called Salling Media Sync. It doesn’t include a music store. Instead, its only purpose is to sync your Android device to the iTunes library. Just what I needed, I thought and downloaded it right away. Installation was easy (since there is none). Just copy the *.app file to your application folder and that’s it. Once started, Media Sync instantly found my smartphone (wow!) and displayed some information about it (free disc space etc.). After selecting the media which I wanted to sync (music, podcasts, pictures) I pressed “sync” and that’s it. How easy is that? I was really impressed how simple Media Sync works.

The application itself is now available in the quick launch bar on the top right of your mac screen and automatically starts when the Mac has booted, so whenever you connect your Android device, Media Sync will check if synchronization is required and if yes, it will do that:

The basic version of Media Sync is free. You can just download and use it as long as you want. The only downside here is that whenever the application synchronizes your phone, it will copy all files, which is often not required and can take quite a while, especially if you carry a lot of gigabytes with you, like I do.
So, if you don’t want that, I recommend spending 15 EUR and purchase the full version which supports smart synching. That means, that Media Sync will only copy the files which are really necessary. This way, the whole synchronization process gets a lot faster.

I am really happy now with Media Sync. The 15 EUR are absolutely worth spending.